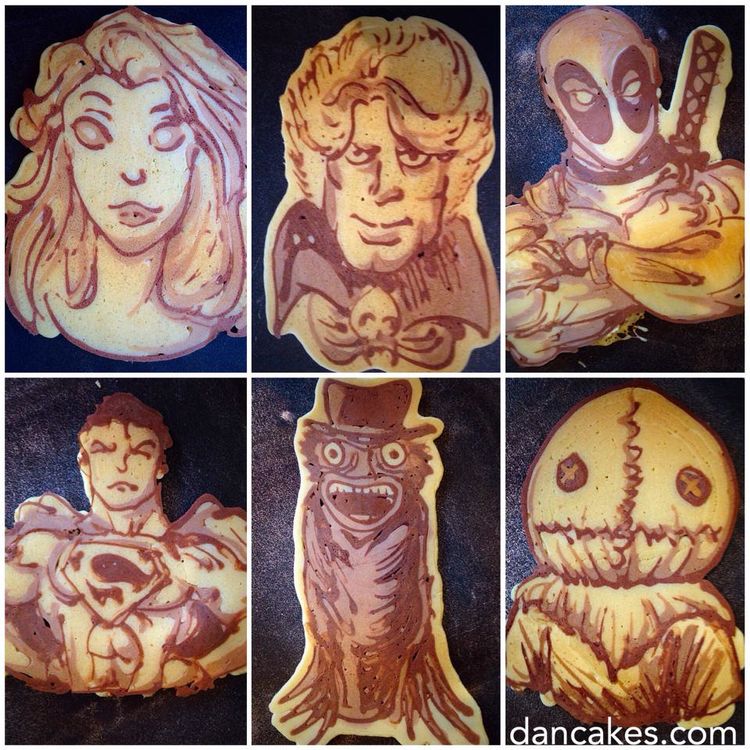 THE BEGINNING
You see, the story goes that Dan was working a greasy job at a greasy-spoon, flipping burgers and frying eggs, when one day he had an idea - could he make better tips if he drew pictures in pancake batter? He decided to give it a try one slow afternoon and the first Dancake ever served netted him a neat $15. The guy who ate it loved it, and may have changed the world forever. Dan got into the habit of serving smiley-face pancakes because, hey, if one guy thought it was worth it, there would definitely be more.

Fast forward five years - Dan's 23 now, and it's late summer of 2013 - when all of a sudden, the internet finds out about him. A photo has been posted to facebook, then reddit, and Dan's cell phone is 'blowing up'. "Dan," say his friends, "You're internet famous now." The reddit post leads people to Dan's facebook fan page - 'Dr. Dan the Pancake Man' - and a few weeks later a producer from NBC's The Today Show is calling Dan while he's on the job. "Hey there," says the voice on the other end of the line, "Am I speaking with, uh, Dr. Dan the Pancake Man?"

They wanted to fly him out to NYC the next day so that he could be on air the morning before Thanksgiving. Not wanting to go alone, Dan invited Hank, his best friend and bandmate, and Hank said yes without hesitation. The night before the broadcast the pair applied for their LLC and the company that would become Dancakes was born.

NOWADAYS
After the Today Show, strangers started finding out about Dan's pancake art. "Do you do parties?" they asked. "Do you take commissions?" To Dan, the idea of cooking pancake art for money instead of sweating over a restaurant griddle for eight hours a day sounded like paradise. Dan and Hank saved up a little money and invested in a logo, a website, and some new tools and materials. They started to create content for YouTube. They started to get smart. They started training pancake artists

Now, they're quickly becoming the most prestigious name in pancake art and entertainment, offering multiple. Dancakes productions are known for their quality and finesse, their no-nonsense approach to artistic integrity. They blend wit, skill, and style into their videos, and they bring a personal charisma to live events that's impossible to replicate. They are to pancake art as Dave Brubeck is to jazz, pushing the envelope and making the medium cooler with every cake flipped. If you want to be the talk of the town, hire Dancakes.